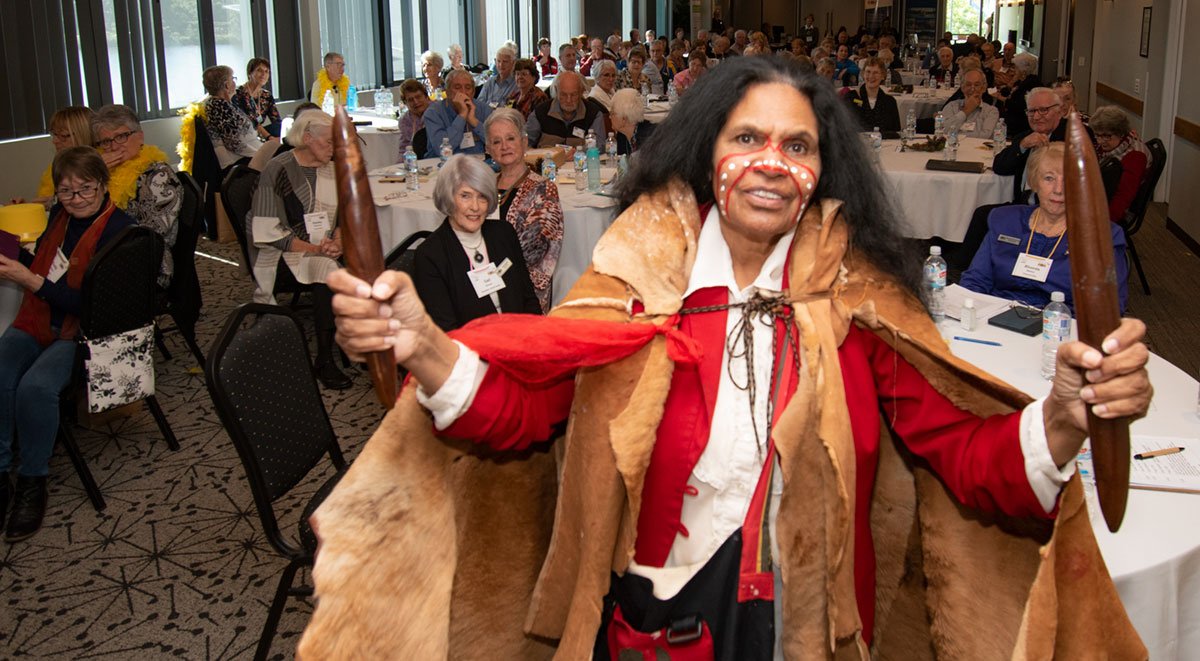 At the opening of the U3A State Conference at North Lakes Songwoman Maroochy Barambah performed a Welcome to Country, a traditional indigenous ceremony performed at gatherings to welcome visitors to the land.

Maroochy is the Songwoman and Lawwoman of the Turrbal People, the original inhabitants of Brisbane, and the Dippil people of the Sunshine Coast area. She is a direct descendant of Daki Yakka – Chief of the Old Brisbane tribe.

She has received many awards (both in Australia and overseas), including an Honorary Senior Fellowship of the University of the Sunshine Coast in 2000 for her outstanding and sustained contributions to the community.

Maroochy  gave a background on her life story and sang advanced Australia Fair in her native language, which was extremely well received

Maroochy Barambah, an Aboriginal Elder from Brisbane, is of Turrbal and Gubbi Gubbi ancestry with additional bloodline connections to Wakka Wakka, Kamilaroi and Birri Gubba Country. As the Songwoman and Law-woman of the Turrbal Tribe Maroochy is well qualified and has the ancestary to perform the Welcome to Country ceremony.

Maroochy spoke of her upbringing as an aboriginal woman born on Cherbourg Aboriginal Reserve in South East Queensland. She is the Songwoman and Law-woman of the Turrbal Tribe who attended the Melba Conservatorium of Music in Melbourne and the Victorian College of the Arts, graduating in Dramatic Arts.

Over the past five decades Maroochy has delivered lectures on Aboriginal culture at various institutions and was a keynote speaker at the Australian Reconciliation Convention in Melbourne.

In 1989, Maroochy made her operatic debut playing the lead role in Black River where she became the first Aboriginal person to perform on the Australian operatic stage. Black River, that focuses on black deaths in custody, won the 1993 Grand Prix Opera Screen Award in Paris.

Later in 1993, Maroochy became the first Australian to perform at the United Nations in New York in honour of the International Year for the World’s Indigenous Peoples. In 2014, she performed the traditional Welcome to Country Ceremony at the Brisbane G20 Summit with world leaders such as Barack Obama and David Cameron in attendance.

Maroochy appeared in the Indigenous musical Bran Nue Dae, the television series Women of the Sun, and in the opera Beach Dreaming (written for and about her by Mark Isaacs). Maroochy also released two singles, one of which, Mongungi, reached the top 10 on the U.S. Billboard Dance chart.

Maroochy has received many awards in Australia and overseas. She intends to continue working in the performing arts while engendering a better understanding of Aboriginal culture.